We will be offering "Basic Composition of Coatings"  March 25-29, 2013 (Spring 2013). The Basic Composition course is intended for new personnel in the coatings profession. It targets the components of coatings (resin, pigments, extenders, solvents and additives), testing and specifications, general formulation and manufacturing methods. Basic Composition is primarily a lecture course with several laboratory demonstrations.

We will be offering "Introduction to Paint Formulation"  May 6-10, 2013(Spring 2013) . This course is intended to give the person a fundamental knowledge of how to approach a starting formulation and troubleshoot it. This course involves both lecture and laboratory work.

We will be offering "Introduction to Coatings Composition and Specifications" July 17-19, 2013 (Summer 2013), course designed for the new coatings person in areas such as sales, marketing or production. The course was initiated by a number of raw material companies and distributors requesting a course with this format. This course is not as heavily technical as is our “Basic Composition of Coatings" and “Introduction to Paint Formulation" courses. The ?Introduction to Coatings Composition and Specifications" course is a two and a half day course which will discuss the types of coatings, the basic composition of coatings and the tests and specifications used by the industry. This course will allow the participant to gain the fundamentals needed to work in this industry and to communicate more clearly.

For more information see our web site at http://coatings.mst.edu and to register contact Catherine Hancock at cemv26@mst.edu or coatings@mst.edu or call 573-341-4419. **These courses are held on the Rolla Campus**

Don't forget to check our employment section for our students and companies. We have a full time job section, an intern / co-op section and a graduating and alumni students section . Please explore our section on employment on our web site. Anyone wanting to have job opening listed, please contact us at (573) 341-4419 or e-mail: Sagar Gade at svgwcc@mst.edu . You can also write to us at Missouri S&T Coatings Institute, BOM #2, 651 W. 13th St., Rolla, MO 65409-1020.

When metals become in contact with an aqueous environment, oxidation of metal begins at a high rate.  Metal atoms are removed from their lattice with loss of the electrons to produce metal cations.  Eventually, a dynamic equilibrium is attained and oxidation process terminates as a result of negative charge build up on metal surface. Polar water molecule will be attracted to the negatively charged metal surface to form ionic structure layer. This structure behaves essentially as a capacitor and prevents other ions from bulk solution to be part of it (1). 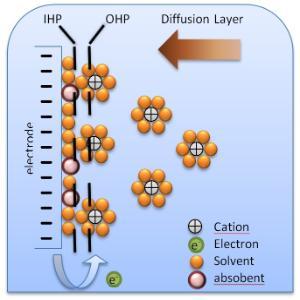 This order is explained by lower electronegativity of elements on the left that make their compounds easily susceptible to polarization (4).

Hard and soft base Principle:

In the view of hard and soft acid/base theory that was propounded by Ralph G.Pearson (5), which states that hard acids prefer to bind to hard bases and soft acids prefer to bind to soft bases. This rule was applied in studying corrosion inhibition mechanisms. Organic inhibitors can be classified as soft and hard inhibitors based on their polarizability(12), soft molecules possess high polarizability and hard molecules possess low polarizability. Neutral metal atoms are soft acids, so they prefer to bond soft bases like Sulphur-containing inhibitors. In turn, Nitrogen-containing inhibitors are considered to be hard bases. Therefore, they interact with neutral metal atom less strongly than sulfur containing inhibitors (3),(6).  It should be noted that iron(II) would be considered much softer than Al(III).  Thus an inhibitor which is good for iron would not generally be good for aluminum.

Many studies revealed that an increase in the electronic charge on the functional atom results in promoting the ability of organic molecule to be adsorbed to metal surface, thus enhance inhibition efficiency.  Hackerman and his co-workers (7) establish that the inhibition efficiency enhanced by increasing electron density at function atom. More investigations conducted by Trabanelli (8) backed this theory when studying alicyclic amine compounds, concluding that the increase in inhibitors effectiveness was related to the high electron density around nitrogen atom.

The availability of π electrons due to the presence of multiple bonds or aromatic rings would facilitate electron transfer from inhibitor to the metal besides enhancing the electron density on the donor atom. This effect can also be influence by introducing electron donating and withdrawing substituents in suitable position in molecule(3).

Where; ρ is constant for given reaction and σ reflects the influence of substituent on the electron density of reaction center of molecule

The Hammet equation has been applied in corrosion inhibitor studies. The effectiveness of inhibitors can be correlated with Hammett’s σ parameter.  Sastri and Perumareddi (10) conclude that the corrosion rate for pyridine derivatives as a function of σ values obtained from Hammet equation decreased or the percent inhibition increased as the negative σ value increased. The negative σ value indicated the electron donating property of the substituent.

To be considered as an effective inhibitor, organic molecule should meet the following requirement.