Fall Short Course Are Coming Up Soon!!!
**These courses are filling up fast! This past spring's courses hit capacity early, so register today for Fall courses!!**

This fall we will be offering “Basic Composition of Coatings¿? September 11-15, 2006 and “Introduction to Paint Formulation¿? October 9-13, 2006 . The Basic Composition course is intended for new personnel in the coatings profession. It targets the components of coatings (resin, pigments, extenders, solvents and additives), testing and specifications, general formulation and manufacturing methods. Basic Composition is primarily a lecture course with several laboratory demonstrations. The Introduction to Formulation course is intended to give the person a fundamental knowledge of how to approach a starting formulation and troubleshoot it. This course involves both lecture and laboratory work For more information see our web site at http://coatings.mst.edu and to register contact Michael Van De Mark at coatings@mst.edu or call 573-341-4419. **Both courses held on the Rolla campus**

We hope to see you at the ICE show in New Orleans, LA on November 1-3, 2006 . Stop by our booth and enter to win a St. Pat’s Sweat Shirt . Five shirts will be given away at this year’s show. We will have resumes of students and the display will feature our new equipment and research efforts. Come by and discuss what we are doing and how we can interact better with your company.

Gloss: What is it and is it a percentage?
By Michael Van De Mark, Director, Missouri S&T Coatings Institute

The gloss of a surface or coating is a measure of the surface’s ability to reflect light at a specific angle. Usually the angle of incidence, or reflection, is 20, 60 or 85 degrees. The gloss is often referred to as the specular reflectance at a specific angle. The actual angle between the light source, surface and the observer is twice the angle specified. Many years ago a search for a maximum gloss standard was made and the gloss of 100 was established based upon that standard. The gloss of zero was easily set as no reflection. Since that early date, many surfaces have been found which have glosses above 100. The gloss of 100 is therefore set based on a glass standard based on ISO 2813-1978 and not simply on 100% light reflectance.

The following are a few examples of the 60 degree gloss ranges for typical resins:

Many people believe the gloss scale is a percentage but it is really a number line without a limit. Metallic mirrors, for example, can have significantly higher gloss than 100.

In addition to gloss, surfaces can be characterized by haze measurements, DOI (distinctness of image) or orange peal, and for clear coatings the transparency of the film can be measured. Coatings color is also an obvious related issue. 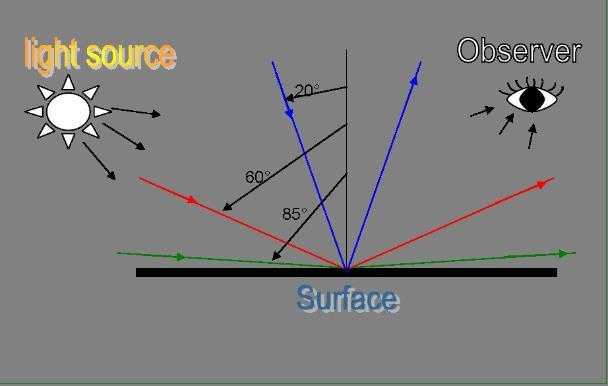 The interface between coatings can be affected by several things. If the primer is a cross-linked coating , the degree of cross-linking in the primer generally increases with time after application. The time between primer application and top coating must be long enough to allow the solvent to leave and cross-linking to begin. However, the time should be less than that required to fully cross-link the film. As the cross-link density increases the ability of the top coat to penetrate and entangle with the primer decreases, thus reducing the adhesion.

Solvents in the top coat usually swell the primer or under coat. This swelling allows the two coats to entangle and greatly improves adhesion. In water borne dispersions, such as latex coatings, the water evaporates followed by the glycol and then the coalescent solvent, leaving the solids behind. The solvent used to coalesce the latex is usually hydrophilic high boiling glycol ethers or hydrophobic alcohol/esters that may not swell the previous layer of paint, i.e. the primer or base coat. To improve adhesion you may have to add an additional solvent to the coating to swell the previous coat, or change the coalescent aid to one compatible with both coats. The solvent must be high boiling to allow water to evaporate first. If this approach fails, you may need to change your primer or base coat to gain compatibility and thus better inter-coat adhesion.

In recent years, the use of aziridine or other cross-linking agents in water borne coatings such as polyurethane floor finishes has increased. When these films are allowed to dry and cross-link, usually requiring about 2-4 hours, the ability of subsequent coats to have significant adhesion decreases. Even a small amount of cross-linking will have a very detrimental effect on adhesion to most water borne coatings. Surface abrasion may be the only way to increase adhesion. Remember adhesion to a surface is generally directly proportional to the true microscopic surface area and not the measured geometrical surface area.