We will be offering "Introduction to Paint Formulation" May 18-22 (Spring 2020). This course is intended to give the person a fundamental knowledge of how to approach a starting formulation and troubleshoot it. This course involves both lecture and laboratory work.

Water-borne coatings use water as the dispersion medium and diluent. Compared with traditional organic solvent-borne coatings, water-based coatings save a lot of organic resources which greatly reduces the atmospheric pollution caused by the volatilization of organic solvents in coatings.1 Therefore, water-borne coatings have become the mainstream of the coating industry. However, during transportation and storage, the large amount of water in coatings will freeze at low temperature, and cause coating defects.2 Thus, in order to achieve better free thaw stability, addition of anti-freeze is necessary. Antifreeze is an additive that can prevent part of the water from freezing at low temperature by lowering the freezing point. Thus providing a layer of liquid around latex particles that keep the particles separated. The freeze thaw resistance can be evaluated by separating a water-borne coating into two pint-size (500mL) resin-lined cans, keeping one can at room temperature, while other can is going through cycles of freezing and thawing processes. After cycling, the coating in both cans are examined for any change of viscosity and visual film properties.3

When water-based coatings are exposed to cold temperature conditions, water will start to freeze and form ice crystals. As the crystals grow, there is less and less liquid water existing in the dispersion and therefore the concentration of latex particles increases in the remaining liquid, and the latex particles are forced close together. This increases the potential particle aggregation which result in undesirable coagulation and coalescing of latex particles,7 shown in Figure 1.

For a low Tg polymer, the chains can still flow and particles coalescence at lower temperature, therefore the coagulation and coalescing problem is more serious. Because water/glycol mixtures have a much lower freezing point, the use of glycol can inhibit part of water from freezing which keep a layer of non-freezing liquid around each latex particle, stabilizing the coating. However, many disadvantages have limited the usage of glycols. Both ethylene glycol and propylene glycol are volatile. In many situations, in order to maintain a low level VOC the freeze thaw ability has to be compromised. In addition, without the presence of inhibitor, glycols can react with oxygen and metal ions, thus forming organic acids and accelerating the corrosion of metals in the system.5,6

Colloidal Unimolecular Polymer (CUP) particles are a new class of nanoscale material. It is a potential candidate to replace the traditional glycols as anti-freeze or the co-resin for latex and polyurethane dispersions. The polymer can be simply synthesized and made into colloidal form by a water reduction process. CUP is spheroidal and has a particle size ranging from 3 to 9 nm. Also, during the water reduction process, all the volatile organic contents were completely removed, CUP has zero VOC.8 These particles generally associate with a large amount of non-freezable surface or bounded water (about the same weight percent as CUP solids), due to the hydrophilic groups on the surface,9 shown in Figure 2. 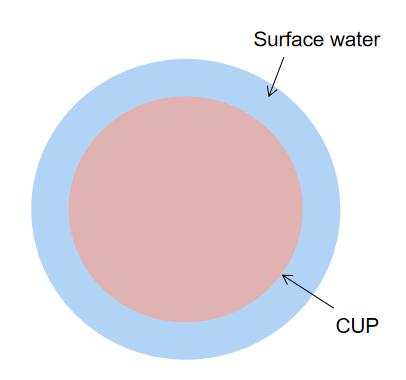 Figure 2. CUP with surface water around the solid

According to the previous study by Van De Mark et.al., the amount of surface water increases with the decreasing of particle size assuming the surface water thickness is constant. This increased water is because at the same solid percent, smaller particles have larger surface area.10 Using a latex formulation as an example, it contains 30% (by volume) latex particles, 20% pigment particles and 50% water. If we replace 1/3 latex particles by CUP particles as a co-resin (5 nm particle size as an example), there are approximately 10% surface water, 20% latex particles, 20% pigment particles and 40% ice when all water freezes. Therefore, the number of particles of CUP to latex is 4000:1, and the total surface area of CUP particles is 10 times larger than latex particles. Thus, when all the free water freezes, CUP can maintain sufficient non-frozen fluid that prevent the latex particles from contacting with each other, thus increasing the freeze thaw stability, shown in Figure 3.