We will be offering "Introduction to Paint Formulation" Oct 21-25 (Fall 2019). This course is intended to give the person a fundamental knowledge of how to approach a starting formulation and troubleshoot it. This course involves both lecture and laboratory work.

Surfactants are a group of compounds that can significantly change the interface state of a solution system at low concentration. Surfactant is an amphiphilic structure that has a fixed number of hydrophilic and lipophilic groups that can be aligned on the surface of the solution.1 The molecular structure of the surfactant is amphiphilic: one end is a hydrophilic group and the other end is a hydrophobic group. The hydrophilic group is a polar group such as carboxylic acid, sulfonic acid, sulfuric acid, amino group or amine group and their salts.2 Also, hydroxyl group, amide group and ether are considered as polar hydrophilic groups. The hydrophobic group often includes a non-polar hydrocarbon chain with eight or more carbon atoms, shown in Figure 1. Surfactants are classified into ionic surfactants, nonionic surfactants, amphoteric surfactant, and complex surfactants.

When the surfactant in water is at a low concentration, it is in a molecular state and dispersed in water. Surfactants reduce the surface tension of water by adsorption at the interface between air and water or at the interface between oil and water. When the concentration is gradually increased to a certain point, many surfactant molecules can aggregate into a large group to form aggregates (micelles) in bulk solutions. This point is called critical micelle concentration (CMC), it’s defined as the minimum concentration required to form micelles.7 An aggregation number is used to describe the number of surfactant molecules that are associated with the micelle, it’s usually measured by light scattering.

When a surfactant is dissolved in a non-polar organic solvent, and the concentration exceeds the critical micelle concentration, the micelle formed in the organic solvent is called reverse micelle, in which the non-polar groups are externally contacted with a non-polar organic solvent, while the polar groups are aligned to form a polar core. This polar core has the ability to dissolve polar substances, and after the polar core dissolves in water, it forms a “water pool”, shown in Figure 2. Reverse micelles are a spontaneously formed nanoscale aggregate that is a transparent, thermodynamically stable system.8 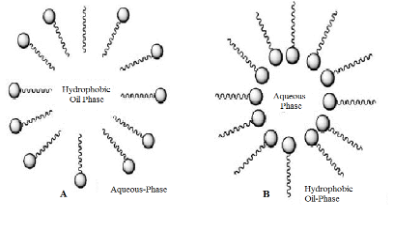 Figure 2. A. micelle; B. reverse micelle

Mh: molecular mass of hydrophilic portion of the surfactant molecule

Based on the Griffin’s method, the HLB value was set to be 0-20, the saturated alkane group with the largest hydrophobicity was set to 0, while the surfactants consisting entirely of hydrophilic polyoxyethylene has an HLB value of 20. The larger HLB value, the stronger the hydrophilicity.

Surfactants are a flexible, practical chemical product with a wide range of application, such as lower surface tension, detergents for extracting proteins, also as wetting agents, dispersants, emulsifier and etc. For example, wetting agent is a substance that can dissolve in water, lower the contact angle, replacing an air phase to a liquid phase at the surface, and wet a hydrophobic pigment that is insoluble or not wetted by water, which is very important for paint. A proper wetting agent can also ensure the coating to wet to a more uniform surface, including low surface energy substrates, defective and dirty surface.11  Cationic surfactant will cause precipitation in latex paint, so only nonionic and anionic can be used. Emulsifier is used to improve the surface tension between various constituent phases in the emulsion to form a uniform and stable dispersion or emulsion.12 The emulsifier is a surface active substance having both a hydrophilic group and a lipophilic group in the molecule, which aggregates at oil/water interface, can reduce the interfacial tension and reduce the energy required to form the emulsion, thereby increasing the stability of the emulsion. The latex resin is synthesized by adding an emulsifying surfactant to water, which forms micelle, followed by the monomer and an inhibitor. The monomers are stabilized inside the micelle and as it is polymerized the micelle grows due to the addition of more monomer. The number of particles is controlled by the amount of surfactant and the diameter of the latex particles is controlled by the amount of monomer added.13 Detergent is a surfactant that specially formulated for cleaning purpose. The main components are usually composed of alkylbenzenesulfonates, which is similar to soap but more soluble in hard water.14 They are mostly amphiphilic, the hydrophilic and hydrophobic dual nature can facilitate the hydrophobic compounds with water.