We will be offering "Introduction to Paint Formulation" May 14-18  (Spring 2018) and August 13-17 (Fall 2018). This course is intended to give the person a fundamental knowledge of how to approach a starting formulation and troubleshoot it. This course involves both lecture and laboratory work.

We have started an employment section for our students and companies. We have a full time job section, an intern / co-op section and a graduating and alumni students section . Please explore our section on employment on our web site. Anyone wanting to have job opening listed, please contact us at (573) 341-4419 or e-mail: mstformulation@mst.edu . You can also write to us at Missouri S&T Coatings Institute, BOM #2, 651 W. 13th St., Rolla, MO 65409-1020. Our web site is http://coatings.mst.edu

A property of most coatings and paints that depends heavily on rheology is the dispersion of agglomerates.  The level of dispersion required in a coating will depend on the desired tint or gloss. Dispersions are often characterized as having non-Newtonian properties and a high yield value. Yield is the minimum shear stress that a fluid must reach before it begins to flow. As more pigment is added to the mixture, the yield value increases. It is desirable to avoid this because a higher yield value increases the chance of the pigment to “kick-out” or shock. The optimum pigment- dispersant will have a low yield value.1 Dispersion can be sorted into four stages: deagglomeration, wetting, distribution, and stabilization.2

Shear depends on the velocity of a moving component, the dimensions of the moving component and fixed wall, and the force applied to the system. Shear thickening materials become more viscous as shear increases while shear thinning materials become less viscous. Thixotropic materials have a dynamic relationship between viscosity and shear. More detail on these can be seen in the previous issue of the newsletter.

Impact force is another type of mixing that often affects larger particles. This process does not involve any shear or “horizontal” stress, but acts upon the particle in a perpendicular manner. This method is not intended to alter original particle size or shape, but only to separate the particles in the aggregate; similar to the impact of a cue ball to cause the break in a game of pool. 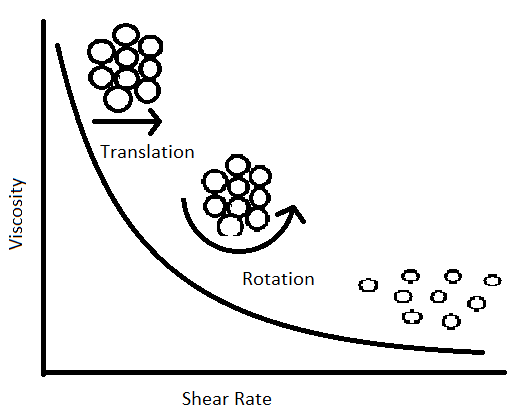 Wetting is the process in which the pigment surface is modified to become compatible with the solvent system. The wetting agent must be chosen so that it is compatible with the pigments being used in the system. This may take some time, which can be related as directly proportional to the viscosity of the mixture. High shear may be desirable during this step because an increase in temperature reduces wetting time, but the decrease in viscosity that follows causes difficulty in deagglomeration.

Distribution is perhaps the simplest dispersion process. It can be defined as the spreading out, or diffusion of pigment particles throughout the mixture. This is done easiest with a lower viscosity as the particles can move more freely. Turbulent blades work better for this process versus the blades used when shear forces are desired.

Stabilization involves preventing the pigments to reagglomerate. It is more apparent in lower viscosity coatings and can be difficult to control. Often dispersants are added to the mixture to prevent this.There are three main forces involved in stabilization. Van der Waals forces are attractive forces between particles that could potentially cause them to flocculate. These forces rely heavily on the geometry of the particles and the distance between them. They occur when the electron clouds become more dense in one area producing a partial negative charge which attracts other particles with negative charges in the opposite direction.

When charged particles are present, electrostatic forces must be considered. A charge double layer may form around the particles and cause them to be either attractive or repellant depending on charge, pH, and salt concentration. Electrostatic forces are more commonly seen in aqueous systems.

Steric stabilization is a repulsive force that involves counter-acting Van der Waals forces as well as polymer adsorption. Pigments may become bound to or “trapped” by dispersants or other organic polymers within the system and prevented from coagulating. This is the most dependable type of stabilization as it is irreversible.

Stabilization is often determined by evaluating the system at various levels of shear stress and calculating the yield. A more stable system will exhibit behavior more Newtonian behavior than a nonstable system.