We will be offering "Basic Composition of Coatings"  September 22-26, 2014 (Fall 2014) and March 16-20 (Spring 2015). The Basic Composition course is intended for new personnel in the coatings profession. It targets the components of coatings (resin, pigments, extenders, solvents and additives), testing and specifications, general formulation and manufacturing methods. Basic Composition is primarily a lecture course with several laboratory demonstrations.

We will be offering "Introduction to Paint Formulation"  October 20-24, 2014 (Fall 2014) and May 18-22 (Summer 2015). This course is intended to give the person a fundamental knowledge of how to approach a starting formulation and troubleshoot it. This course involves both lecture and laboratory work.

We have started an employment section for our students and companies. We have a full time job section, an intern / co-op section and a graduating and alumni students section . Please explore our section on employment on our web site. Anyone wanting to have job opening listed, please contact us at (573) 341-4419 or e-mail: mstformulation@mst.edu . You can also write to us at Missouri S&T Coatings Institute, BOM #2, 651 W. 13th St., Rolla, MO 65409-1020. Our web site is http://coatings.mst.edu

Micro-Indentation testing for hardness and modulus of coatings

Indentation hardness is defined as the resistance of a material to permanent penetration by another harder material.1 The calculated hardness (H) is the applied force (F) divided by the corresponding area of contact (A); H = F/A. Many different methods have been developed in the past to determine the hardness of a material. For hardness of metals and ceramics, Rockwell test is used which employs a diamond cone. 2 Durometers are used for hardness determination of soft polymeric materials2. For surface hardness determination, Vickers and Knoop hardness2 are used which employ diamond shaped pyramidal indenter where the four sides meet at a point.2 Low loads up to 5 N are utilized and the area of indentation is measured optically. Until recently, pencil hardness measurement has been commonly used in the paint industry.3 These tests lack in reliability and reproducibility. Even the Vickers method involves uncertainties due to the inaccuracy of the optical measurements and the operator error.4 As a result, a new method has gained considerable interest, especially when the optical evaluation is extremely difficult as in the case of hard materials. This method, formerly known as the universal microhardness test, is now known as the Martens test and is suitable for testing the micro and nano-hardness of most hard materials.4

The microhardness value is determined from the indentation depth under working load and therefore the material’s viscoelastic and optical properties have less effect on the hardness. In contrast to traditional tests, Martens test provides the ability to continuously measure the indenter penetration under the applied load during the test cycle. Martens hardness data gives a single hardness value that characterizes the material’s complex resistance to the total elastic–plastic deformation. In this way it is possible to measure the elastic and plastic deformation of materials using the initial slope of the unloading curve.4

The Martens microhardness testing procedure involves forcing the vertex of a diamond indenter into the surface of a sample and measuring the indentation depth under a testing force maintained for a desired amount of time. The indenter used has a pyramid shape, with a square base (vertex angle =136 o). Two types of testing methods can be used for the microindenter. In the first method called the Standard method (SM), load is applied incrementally up to a maximum, followed by the unloading cycle, Figure 2. The maximum load is determined experimentally as the load above which the substrate starts interfering with the hardness measurement. 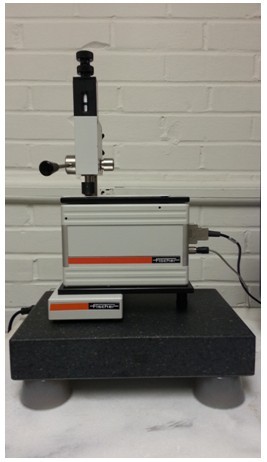 In the second method, known as Enhanced Stiffness Procedure (ESP), each load increment is followed by unloading and then again loading cycle, till the maximum load is reached. The Standard method gives hardness at maximum load while the ESP method gives the hardness value at each incremental load thus giving a depth profile of the hardness of the coating. In both the methods, force and depth are measured and recorded continuously, both during the loading and unloading cycle. A typical load-depth curve for ESP method is shown in Figure 3. 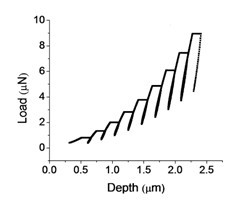 The instrument automatically calculates the Martens hardness (HM) defined as the applied normal force (F) divided by the projected area (A) on the original surface at a given point in the experiment using the Oliver-Pharr method from the resultant load vs indentation depth curve (loading/unloading cycles).5

Points to remember while operating the instrument:

1) The indentation depth should not exceed 30% of the total thickness of the coating film.

2) A distance at least 100 times greater than the indentation depth should be kept between the edge of the sample and the center of each indentation.

3) Before any test, calibration is performed with an acrylic plate to ensure that the results are within the normal range of reproducibility.

Thus with indentation technique both hardness and elastic modulus of coating film can be measured directly and quantitatively and a wide variety of materials ranging from soft polymers to hard ceramics can be characterized using a single tool.