We will be offering "Basic Composition of Coatings"  September 22-26, 2014 (Fall 2014). The Basic Composition course is intended for new personnel in the coatings profession. It targets the components of coatings (resin, pigments, extenders, solvents and additives), testing and specifications, general formulation and manufacturing methods. Basic Composition is primarily a lecture course with several laboratory demonstrations.

We will be offering "Introduction to Paint Formulation" May 19-23, 2014 (Spring 2014) and October 20-24, 2014 (Fall 2014). This course is intended to give the person a fundamental knowledge of how to approach a starting formulation and troubleshoot it. This course involves both lecture and laboratory work.

We will be offering "Introduction to Coatings Composition and Specifications" July 21-23, 2014 (Summer 2014), course designed for the new coatings person in areas such as sales, marketing or production. The course was initiated by a number of raw material companies and distributors requesting a course with this format. This course is not as heavily technical as is our “Basic Composition of Coatings" and “Introduction to Paint Formulation" courses. The ?Introduction to Coatings Composition and Specifications" course is a two and a half day course which will discuss the types of coatings, the basic composition of coatings and the tests and specifications used by the industry. This course will allow the participant to gain the fundamentals needed to work in this industry and to communicate more clearly.

We have started an employment section for our students and companies. We have a full time job section, an intern / co-op section and a graduating and alumni students section . Please explore our section on employment on our web site. Anyone wanting to have job opening listed, please contact us at (573) 341-4419 or e-mail: svgwcc@mst.edu . You can also write to us at Missouri S&T Coatings Institute, BOM #2, 651 W. 13th St., Rolla, MO 65409-1020. Our web site is http://coatings.mst.edu

Alkyd resins have lost some popularity due to environmental regulations, but still remain a major vehicle in the paint industry today.  VOC regulations have generated research efforts to improve water-borne alkyd paint, where the alkyd resin is emulsified in water instead of a solvent. While water-borne alkyd paint has gained popularity, there are still many distinct advantages to using solvent-borne alkyd paint, for example: lower cost, ease of application, extensive applications and drying tolerance under unfavorable conditions and a higher level of performance on problematic substrates, such as heavily stained or powdery surfaces.1 These advantages have sparked research interest in high-solids alkyd paints so that VOC emission is reduced.

Another cause for concern is the catalysts used as driers for the alkyd resin. Today the most common and available catalysts contain cobalt complexes. Along with cobalt, manganese, iron, zirconium, calcium and zinc are also commonly used. Like lead, cobalt has been found to be environmentally toxic and its use should be minimized.3 The toxicity has lead researchers to look for cobalt-free driers.  It is important to understand the purpose of the drier and the significance of cobalt as a metal catalyst in alkyd resins so that new, better and safer driers can be utilized.

The Drying of Alkyd Resins

Figure 1. Simplified structure of an alkyd made from phthalic anhydride, glycerol and linoleic acid.

Oxidizing alkyd resins are polyesters of one or more polyols, one or more dibasic acids, and fatty acids from one or more drying or semi drying oils.3

The classification of metal-complexes in Table 1 divides the metals into their respective functions. Primary driers are autoxidation catalysts and their most important function is hydroperoxide decomposition. These metals are significant because of their ability to have some stability at two valances that are only one electron apart. Many transition metals prefer to change valence in electron pairs. Cobalt specifically, is the best transition metal for one-electron oxidation CoIIàCoIII. The other primary metal complexes in Table 1 undergo one electron oxidation as well, but can all undergo two-electron oxidation, for example MnIIàMnIIIàMnIV.  The primary driers are considered “top /surface” driers and if used alone can often result in wrinkling that is due to non-uniform crosslinking.4 To prevent defects in the coating, primary driers are usually accompanied with a “through” drier or secondary drier, and then an auxiliary drier can be used if necessary.

The drying mechanisms of alkyd are primarily focused on the chemistry of the production of radicals because they facilitate both the oxidation and the crosslinking reactions within the drying process.5 Possible and accepted mechanisms of the free-radical chain mechanism are usually cited and thoroughly discussed in literature in three steps: initiation, propagation, and termination.1,4,5,6  A detail discussion of the mechanisms involved in the alkyd drying process will not be discussed in this article, but instead a look at the role of metal catalysts, specifically cobalt. The proposed oxidation of alkyd resins by a cobalt catalyst is shown below in Fig. 2 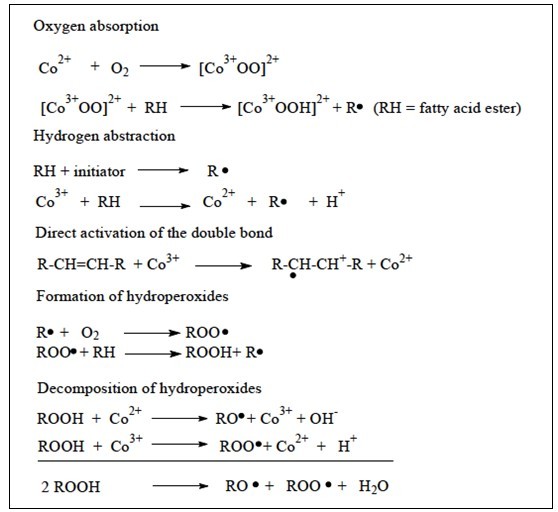 ‌The role of the catalyst has been proposed as:6

i. Deactivation of natural oxidants.

iv. Multivalent metals act as oxygen carriers because of their susceptibility to redox reactions. Hydroperoxides (ROOH) are decomposed into RO• and ROO• with this catalytic action.6

Metal compounds used as driers dates back 4000 years with the Egyptians’ use of drying oils. Major advances in drier technology occurred in the 1920s with the discovery of metal naphthenates. Fig. 3 shows a general structure of the mixture of components in a cobalt naphthenate drier. The next driers to gain popularity were the octanoates, or monocarboxylic acids.  Both metal naphthenates and metal octanoates are readily available commercially from manufactures like OM Group and ARC Chemicals. Other catalysts have been developed improving upon metal naphthenates with isononanoic acid, heptanoic acid, and versatic acid, which offer a more uniform, paler color and have less odor.Cobalt carboxylate catalysts are the most effective and commercially available driers for alkyd coatings, but generally cannot be used alone in the coating. By and large, cobalt catalysts must be supported with a secondary or auxiliary drier and can further be enhanced with drier accelerators, which seem to increase metal activity toward decomposing peroxides. 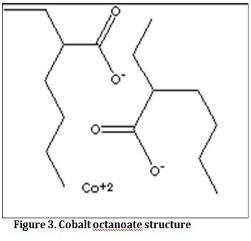 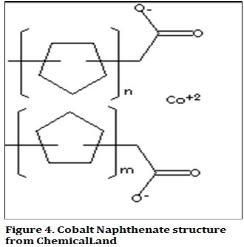 ‌Can Anything Compare to Cobalt?

While it would be great to remove the dependency of transition metals in catalysts, the primary focus of research is reducing the need for cobalt. Manganese, vanadium and iron complexes have been made in hope of competing in the cobalt reliant marketplace.

One of the most promising drier systems studied was the manganese complex, MnIIIacetylacetonate, [Mn(acac)3] by E. Bouwman and R. van Gorkum.7 The strength of this manganese complex was monitored on the oxidative crosslinking of ethyl linoleate (EL). Based on FTIR results the group found that [Mn(acac)3] catalyzes the oxidation of EL at a reasonable rate. [Mn(acac)3]/bpy was also studied and found to have a high rate of oxidation than [Mn(acac)3] . Unfortunately, in real alkyd systems the [Mn(acac)3]/bpy complex was found to be too active. If a catalyst is too active the “autoxidation reactions yield predominantly alkoxy radicals, which result in less oligermization.”7 The group concluded that [Mn(acac)3] performs better than conventional manganese driers and would be a good substitute for cobalt metal catalysts.

Vanadium salts were studied as driers for alkyd based inks by O. Lefebvre et. al. One salt proposed was vanadyl bis(acetylacetonate).8 Traditionally, both a cobalt (fast) and manganese (slow) drier are used for alkyd ink drying. The purpose of the study was to create a drier that would solve the need for the two-component system.

The vanadium salt were successful in that drying times of 1.5-2 hours were observed.8 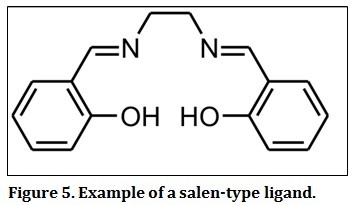 Another group found that Iron-based catalysts combined with ascorbic acid or ascorbic acid-palmitate are possible replacements for the cobalt metal primary driers.6 It was also found that iron, manganese, and other metal complexes substituted with salen-type ligands (Fig. 5) promoted solubility in nonpoplar paints.

Another option for cobalt-free alkyd resins is based on a high solids formulation.R. P. Klaasen and R. P. C. van der Leeuw found that thiol-ene chemistry can be used to enhance the drying of alkyd paints at unfavorable conditions.9 The thiol-ene chemistry was most successful when an instigator of a radial source was used. Ideally, cobalt would be used, but it would found that vanadyl acetylacetonate complexes were effective as well.

Cobalt driers are still the top catalysts used in the coating industry, which is unlikely to change until increased restrictions are placed on the use of cobalt. Manganese complexes have met the effectiveness of cobalt driers, but cost and availability remain an issue. As the restrictions on cobalt increase, so will the research for other options, like better alkyd emulsions.