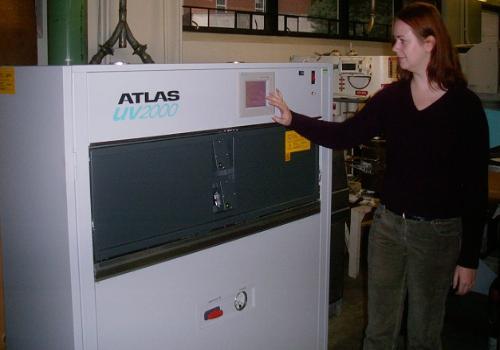 This spring we will be offering “Basic Composition of Coatings¿? March 14-18, 2006 and “Introduction to Paint Formulation¿? May 16-20, 2006. The Basic Composition course is intended for new personnel in the coatings profession. It targets the components of coatings (resin, pigments, extenders, solvents and additives), testing and specifications, general formulation and manufacturing methods. Basic Composition is primarily a lecture course with several laboratory demonstrations. The Introduction to Formulation course is intended to give the person a fundamental knowledge of how to approach a starting formulation and troubleshoot it. This course involves both lecture and laboratory work For more information see our web site at http://coatings.mst.edu/ and to register contact Michael Van De Mark at coatings@mst.edu or call 573-341-4419.

Remember to contact us early if you are planning to hire a summer intern next year. We will make sure that our students are informed of the opportunity.

Exposure to the ultraviolet radiation, moisture, and temperature fluctuations caused by weather can lead to the degradation of polymeric coatings. Both natural and accelerated weathering testing can be used to evaluate the durability of coatings.

Coatings that undergo natural weathering testing are exposed to outdoor conditions similar to those that they would be exposed to with normal use. However, the many variables involved in outdoor testing can affect the reproducibility of the results. Locations for testing in the United States are selected that provide the harshest conditions available. Florida, because of its high humidity and UV radiation levels, and Arizona, due to its high levels of solar radiation and elevated temperatures, are popular testing sites. New Jersey is also used because of acid rain caused by industrial pollutants as well as exposure to freeze thaw cycling. A popular testing method for natural weathering is the ICI joinery section test. This method simulates the most demanding conditions that a coating would be likely to be exposed to. Test panels are mounted on a rack at a 45° angle facing south, so that they are exposed to the maximum incident UV radiation (1). The test pieces are designed with a water trap at the bottom end of each piece, which is left uncoated. Rainfall is thus collected as it drains off the test piece, exposing the uncoated end to standing water. This test simulates realistic effects of natural weathering at low cost. However, because the degradative process is slow, natural weathering tests may take years to yield results. One method for speeding up this process is to employ Fresnel mirrors to concentrate sunlight on the samples. These mirrors, when contained in an EMMA (Equatorial Mount with Mirrors for Acceleration) or EMMAQUA (Equatorial Mount with Mirrors for Acceleration with Water), can track the sun’s path and maximize the samples’ exposure to radiation (2). Because of the need for generating data in a short amount of time, artificial weathering is a popular alternative to natural or accelerated outdoor weathering tests.

Artificial weathering testing is accomplished through the use of instruments that can simulate a large range of weather effects with artificial light sources, temperature variations, and moisture. These instruments are classified primarily by the type of light source they rely on. The three most common types of machines are the Fluorescent UV, the Xenon Arc, and the Carbon Arc. Of the three, the Fluorescent UV machines are the most widely used. They employ fluorescent lamps as light sources, and can be used to test a coatings response to a variety of light, temperature, condensing humidity, and water spray levels (3). An example of this type of machine is the Atlas UV2000 UV Condensation Weathering Device. This instrument holds samples static within its cabinet, and has separate controls for the level of irradiance, temperature, and condensation (3). The UV2000 is microprocessor controlled and thus allows the operator to program any of the conditions and their duration as well as cycles. This type of modern instrumentation allows rapid unattended operation. Unlike previous generations of Fluorescent UV machines, today’s systems have radiometers to help correct the intensity of the bulb emissions to maintain a constant reproducible level of UV exposure independent of bulb life or position in the cabinet. Previous technologies tried to do this by bulb rotation and replacement which only allowed panels within a set to be compared but gave relatively poor month to month reproducibility due to output differences in bulbs. Another widely used instrument that employs fluorescent lamps is the Q-Panel QUV Weathering Tester. Depending on the application, two different types of fluorescent lamps, UVA or UVB, are usually installed in these machines. UVA lamps emit wavelengths above 295nm, which is the normal solar cutoff. This means that UVA lamps usually have a higher correlation with natural outdoor weathering than UVB lamps, which emit the shorter wavelengths below 295nm. Exposure to the short wavelengths accelerates the testing, but it can sometimes lead to effects that would not occur with natural weathering (4). This type of weathering testing is generally fast and cost effective, but fluorescent lamps do not produce visible and infrared light to the extent of the sun. A second classification of weathering machines, using xenon arc lamps as their light source, cover the ultraviolet, visible, and infrared light spectrums. A properly filtered xenon arc produces radiation that more closely simulates UV and solar radiation than any other artificial light source (3). Additionally, technology is now available that allows for the recording of the entire spectrum of filtered xenon arc radiance. In the past, it was only possible to record the irradiation level at a single wavelength, or a specific wavelength range (2). The advances in xenon arc technology correlate with the decline in popularity of machines employing carbon arc light sources. Carbon arc light sources were employed in the earliest artificial weathering testing machines, but are now rarely used (3). The enclosed carbon arc’s spectral emissions in the UV range do not correlate strongly with natural sunlight, and this technology has generally been replaced by fluorescent and xenon arc instruments. These machines, while speeding up the weathering process, also generally produce results that correlate with natural weathering. However, natural weathering tests are often run in conjunction with accelerated tests as a form of confirmation.

Today, technology allows the temperature, intensity, cycle, and many other variables of a test to be controlled, measured or cycled. The advent of microprocessor controls have given these accelerated tests as well as exterior exposure studies a much better set of controls and ability to monitor the conditions. This ability to better control and monitor the test has helped the evaluator better understand the coatings mode of failure and subsequently improve future generations of coatings. It is critical in all weathering experiments that proper controls are included. These controls can be a standard paint used in previous studies which allow for checks on reproducibility. Also sufficient replicates should be included to allow for unexpected issues such as accidental damage to a panel or a hidden defect in the substrate, primer, or coating application. One area yet to be fully developed is a non-destructive evaluation technique to “see through¿? the coating to view failure as it develops. Missouri S&T is pursuing this technology to aid the early detection of failure and quantify its effects.