We will be offering "Basic Composition of Coatings"  March 25-29, 2013 (Spring 2013). The Basic Composition course is intended for new personnel in the coatings profession. It targets the components of coatings (resin, pigments, extenders, solvents and additives), testing and specifications, general formulation and manufacturing methods. Basic Composition is primarily a lecture course with several laboratory demonstrations.

We will be offering "Introduction to Paint Formulation"  May 6-10, 2013(Spring 2013) . This course is intended to give the person a fundamental knowledge of how to approach a starting formulation and troubleshoot it. This course involves both lecture and laboratory work.

We will be offering "Introduction to Coatings Composition and Specifications" July 17-19, 2013 (Summer 2013), course designed for the new coatings person in areas such as sales, marketing or production. The course was initiated by a number of raw material companies and distributors requesting a course with this format. This course is not as heavily technical as is our “Basic Composition of Coatings" and “Introduction to Paint Formulation" courses. The ?Introduction to Coatings Composition and Specifications" course is a two and a half day course which will discuss the types of coatings, the basic composition of coatings and the tests and specifications used by the industry. This course will allow the participant to gain the fundamentals needed to work in this industry and to communicate more clearly.

For more information see our web site at http://coatings.mst.edu and to register contact Catherine Hancock at cemv26@mst.edu or coatings@mst.edu or call 573-341-4419. **These courses are held on the Rolla Campus**

Radiation curing of coatings is the conversion of a liquid, low viscosity coating formulation applied on a substrate into a polymerized and cross-linked network when exposed to radiation of appropriate wavelength. UV curable coatings have been widely developed and used in clear coatings, varnishes, inks and glues because of its prominent advantages of solvent-free formulations, low energy input, faster curing rates etc. But the UV curing technology still faces some drawbacks such as: limited thorough cure in pigmented coatings, harmful side effects of UV radiation, no curing in presence of optical stabilizers for exterior applications etc.1 These disadvantages can be overcome by use of visible light for curing of coating systems. Also, visible light curing is more attractive because of the ready availability of inexpensive and mercury-free light sources such as light emitting diodes (LEDs).2 The most challenging part is to develop efficient photoinitiators which have high molar extinction (absorption efficiency) coefficient in the visible spectrum of light and spontaneously generate radicals on exposure to visible light. There are three general ways of forming free radicals from the photoinitiators:

3) Photosensitization: A process, in which a molecule known as photosensitizer absorbs radiation, gets excited and transfers this energy to photoinitiator which then decomposes to produce free radicals.3

CQ was one of the first photoinitiator used for visibe light curing of resins for dental applications. It has an absorption peak around 469 nm with the molar extinction coefficient of about 47 cm−1/ (mol/L). After absorption of light between 400–500 nm, CQ is promoted to an excited triplet state that interacts with a hydrogen atom donor molecule, like an amine, to generate free radicals. The efficiency of absorbed photons to convert the CQ photoinitiator into radicals depends on many factors. While each absorbed photon definitely creates an excited singlet state, there is the potential for some loss in efficiency in moving from the excited singlet state to the “converted” state. Although intersystem crossing to a triplet excited state is efficient, occurring on the pico-second scale, it is still possible for the singlet excited state to return to the ground state. Once the triplet-state CQ forms, it must then abstract a proton. Otherwise it will return to the ground state.4

It is a Type 1 photoinitiator that acts as both a triplet photosensitizer and a hydrogen donor. This helps in avoiding the use of amines in the paint system which otherwise reduce the hardness of cured films. It can initiate the polymerization of both acrylate and styrene monomers in the presence and absence of air. The mechanism of the photoinitiation shown in Scheme 1, is based on the intermolecular reaction of triplet, TX-SCH2COOH*, with the thiol moiety of ground state TX-SCH2COOH. The resulting thiyl radical initiates the polymerization. These one-component photoinitiators initiate the polymerization much more efficiently than two component systems in which light-absorbing and electron donating acidic sites is composed in independent molecules. 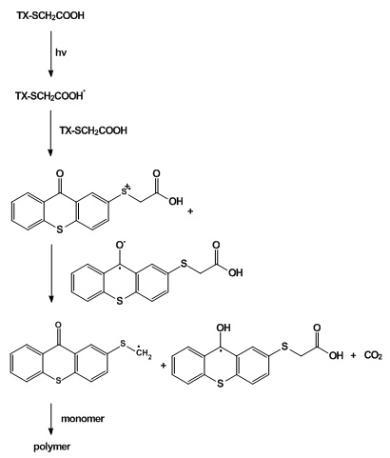 C) Mono and Diacyl-germane based photoinitiators:

The structures of this Type I photoinitiators are shown below:

The absorption characteristics of Ge-1 and Ge-2 in the visible spectrum of light are shown below6:

The mechanism of formation of radicals from benzoyl trimethyl germane is shown below6:

These photoinitiators have excellent photobleaching effect which means that they don’t give color to the coating after film-formation.7 They have good storage stability.