We will be offering "Introduction to Paint Formulation" May 20-24 (Spring 2019). This course is intended to give the person a fundamental knowledge of how to approach a starting formulation and troubleshoot it. This course involves both lecture and laboratory work.

We are also offering a new course, "Coatings Composition and Properties for Sales and Marketing Personnel" March 25-27 (Spring 2019). This course is designed for those in the industry who buy and/or sell raw materials into the coatings market, as well as those who buy or sell coatings or simply use coatings.  The course is intended to help the newer person in the field gain a better understanding of the science behind paint. For more information, including course times and fees, click the course name above.

The density of a substance is its mass per unit volume. It’s often denoted by a symbol ρ (the lower case Greek letter rho). Mathematically, density is defined as ρ = M/V, where M is the mass and V is the volume.  In U.S. the units for density is often pounds per gallon. Here, a standard volume of 1 gallon is used to report the density values. So water, for example, has a density or a weight per gallon of 8.34 pounds/gallon at 4°C. Other countries use metric units such as grams/ml or kg/liter for density. According to the metric definition, 100 grams of water will fill a volume of 100 cm3 at 4°C. Therefore, water has a density of 1.0 grams/cm3 at 4°C. The density of a material can have different densities depending on the purity, packing, etc. Among the known elements, Osmium and Iridium are the densest at standard condition for temperature and pressure. Density of materials can change with temperature or pressure. The density increases with increasing pressure while increasing temperature can increase or decreases the density. For example, density of water increases from 0 °C to 4 °C but it decreases as we increase temperature beyond 4 °C.

Importance of density in paint

Dry film density is a bit more complicated to measure. One can get a good approximation of dry film density based on the density of the wet paint, the density of the solvents and the weight of the solids. This calculation method cannot account for the shrinkage of the film during cross-linking and loss of reaction volatiles which occur especially in thermoset systems.

The general equation is:

Solvent mixtures are often used in paints especially solvent borne ones. Mixing two or more solvents of different densities results in a mixture having weight average density. However, there are exceptions, for example, a mixture of water and ethanol. When 250 ml of ethanol is mixed with 250 ml of water then the resulting solution has volume of 480 ml and not 500 ml as one would expect. Here, the volumes cannot be simply added together. Hence, the actual density is higher than weighted average density of the mixture and needs to be measured. By measuring a mixture of solvents based on their use in a coating an accurate density of the solvent blend can be obtained.

How to measure density

Density of paints is often measured using a density cup or a pycnometer. In U.S. it is often referred as a weight per gallon cup. All the density cup designs work the same way having a precise empty volume with small hole in the lid to allow for excess paint to ooze out. The following standards are used in the industry and labs for measuring the density: D1475—13, ISO 2811 & DIN 53 217. Fig. 1. Shows a picture of density cup that is compliant with the above 3 standard and is used for measuring the density of liquid paint. For very high level of accuracy, sophisticated instruments like Rudolph DDM 2911 density meter is used. It offers accurate measurement to 0.00005 g/cc. Such instrument are useful for high level of work in Pharmaceutical, Chemical, Beverage, Fragrance, and Petroleum industries. One such requirement for high level of accuracy in density is for determining the precise concentration of ethanol in alcoholic drinks manufactured in distilleries. 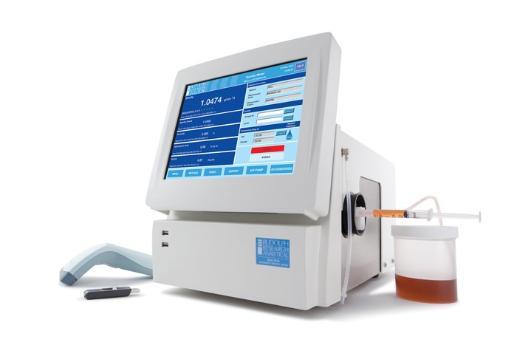